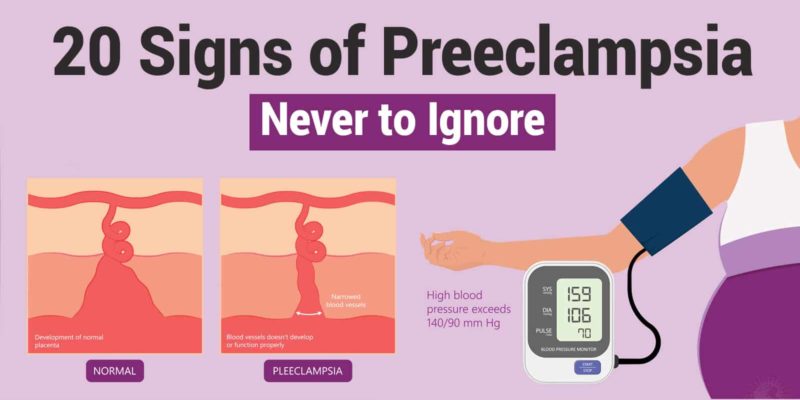 There is nothing more exciting than finding out that you are expecting a child. However, your body goes through many changes and it can be a confusing and even scary time. Conditions like pre-eclampsia and gestational diabetes can threaten the health and safety of both you and your child.

If this is your first the pregnancy, You may not know what to expect, which will only add to the anxiety of the situation. However, there are certain red flags your body will give you that indicate something is wrong, such as with conditions like pre-eclampsia.

Preeclampsia is a complication that arises during pregnancy. A study conducted by the Eunice Kennedy Shriver National Institute of Child Health and Human Development found that around 20-40 percent of women develop this situation each year. It is imperative to treat this condition right away as it can be a serious, even fatal illness for both you and the baby.

What causes this pregnancy complication?

While the exact cause of this medical condition is unknown, there are many theories as to why it develops. First, it is suspected that the placenta is not working properly, causing complications for both the baby and the mother. It is also believed to come from poor nutrition, such as a mother eating a diet rich in fat and carbohydrates, which is often found in obese pregnancies.

Also, blood flow to the placenta may be inadequate, as some blood vessels develop poorly. Lastly, immune function disorders are also known to contribute to problems during pregnancy, specifically pre-eclampsia.

This disorder is identified by hypertension and significant amounts of protein found in the urine of a pregnant mother. Due to its prevalence, doctors routinely screen for this condition. It is usually discovered around 20 to 32 weeks during pregnancy, but it can also appear at other times.

Interestingly, the earlier the condition is discovered, the greater the severity of the problem. Mothers who are diagnosed at 20 weeks are at higher risk than those who are diagnosed later. In the most severe cases, the red blood cells will begin to break down and there will be a low platelet count, which can affect the function of vital organs.

Preeclampsia is so dangerous because it increases the risks that the expectant mother will have seizures or organ failure. The only way to solve this problem is to give birth to the child, but that is not possible when it is detected early in pregnancy.

Could there be a discrepancy of angiogenic factors within the placenta that causes this horrible condition? During pregnancy, new blood vessels are constantly forming as the baby’s need for vital nutrients increases. These vessels will replace the old ones to allow for biological function and development, called angiogenesis.

The danger to the baby

Having insufficient blood flow can cause problems for the fetus, including a lack of oxygen. A fetus born between 20 and 26 weeks’ gestation is considered a “micro-prize.” Even with advanced medical care, complications are significant and the chances of survival are slim.

The goal is lower blood pressure safely to prevent complications. There are many ways this can be done naturally, such as using magnesium sulfate. Unfortunately, putting the mother on bed rest and changing her diet to reduce her salt intake has shown minimal changes in the condition.

This medical condition falls into the category of hypertensive disorders of pregnancy. Unfortunately, it is one of the most common reasons for death for both mother and baby during delivery. Those women with this condition are at high risk of developing complications later in life, such as a stroke or heart disease.

The symptoms that you have developed pre-eclampsia include the following 20 things:

Keep in mind that you may not have all of these symptoms. You can develop a pair. However, when you are an expectant mother, you should evaluate any changes that may indicate a condition such as eclampsia or gestational diabetes, among others.

To make a diagnosis, a doctor only needs to check for an increase in blood pressure and an imbalance of protein in the urine. In many cases, a mother can have this problem and have no symptoms, making it more dangerous. Proper medical care during pregnancy is of the utmost importance, especially when you consider that things like this go unnoticed.

The role of genetics

According to The BMJ, who reported on medical research, the findings were staggering. They found that someone born to a mother who developed pre-eclampsia was more than twice as likely to develop it in their pregnancies.

Another shocking finding was that when the father had this condition in the womb, his offspring increased the risk of developing it. With these data, both the history of this disease of the mother and the father in utero put the pregnancy at risk.

Since the kidneys filter toxins from the body, a mother whose system is already compromised is at increased risk. Your system is even more stressed during pregnancy, putting more pressure on your kidneys.

When a mother already has hypertension before she gets pregnant, it only increases the chances of this condition developing. Blood pressure can rise to uncontrollable levels, which can lead to seizures and other serious complications.

Diabetes is a disease in which the body does not make enough insulin or is resistant to its insulin. When a pregnant mother has diabetes, it puts her at higher risk of developing complications, such as pre-eclampsia.

Carrying a child when you are over 35 years old carries greater risks. This advanced maternal age is often one of the factors that doctors consider in the development of this situation.

When a mother has more than one child, the blood flow may not be adequate for these children. Doctors often observe this condition when multiple babies share a uterus, as it tends to be more common.

• Abnormalities of the placenta

When there are problems with the placenta, such as placental ischemia, it puts the mother at high risk. The placenta is responsible for supplying nutrients through the bloodstream to the child.

Being overweight And having a child already carries a higher risk of complications, but the chances of developing pre-eclampsia increase. Obese mothers are also at risk of developing gestational diabetes and having low birth weight babies born too early.

The thyroid controls many functions within the body. When these vital hormones are out of control, it becomes a contributing factor to this disorder.

Donating a kidney is a generous act from one human being to another. However, during pregnancy, the lack of a robust filtration system can put the mother at advanced risk.

No fancy lab tests are needed to diagnose preeclampsia. The diagnostic criteria state that the mother must have an elevated blood pressure of more than 140 mmHg systolic or 90 mmHg diastolic. The BP readings must have previously been normal, and doctors need two high readings in six hours.

Doctors will also look for proteinuria, or an increase in protein in the urine. They usually do a 24-hour sample and look for levels that exceed 300 mg of protein.

Final thoughts on understanding the risk factors and signs of preeclampsia

For the fetus born to a mother with this condition, it can spell trouble. The fetus may face growth restrictions due to lack of blood flow and the risk of being born prematurely or dying at birth. It is essential for a pregnant mother to monitor her blood pressure both inside and outside the doctor’s office.

If a mother is at high risk of developing this condition, she should be careful in monitoring both her BP and her blood sugar levels. Once this medical problem starts, the only way to solve it is to deliver the baby, but this is not always possible. Depending on the age of the fetus, life may not be sustainable outside the womb.

Fortunately, products like magnesium sulfate have been shown to be a safe and effective way to lower blood pressure in mothers with pre-eclampsia.

To Heal the Human Heart