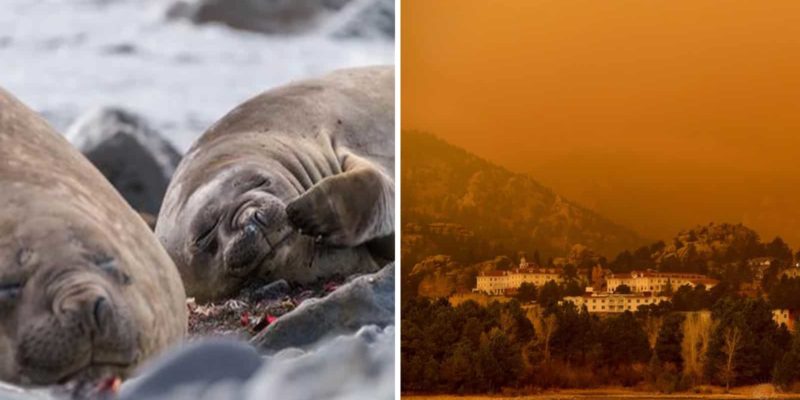 
Whether you’re ready to admit it or not, climate change is real and it’s terrible. Every day the world around us changes more.

This drastic climate change ruins the air we breathe, causing serious respiratory diseases and other diseases. Kill land and sea animals, hampering the ecosystem, and destroy the way of forest fires and floods. Also, in some climates, it causes bodies of water to dry out completely.

If something doesn’t change soon, the destruction and devastation will only get worse. All animal habitats will disappear and houses and buildings will be destroyed. Fortunately, it is not too late to prevent further damage and save Earth.

Photos that capture the severity of climate change

1. Wildfires are leaving the air laden with red and orange smog

This picture was shared on Twitter by a user who lives in Colorado. He explained how the wildfires in Colorado are the result of climate change.

Winters get warmer every year, making it impossible for all beetles to freeze. Since the beetles are not freezing, they are killing the pine trees, leaving them dry. With pine trees dry and dead, fires can start and spread quickly.

2. Breathing will get harder

This Twitter user shared a Photo to show what the air looks like around your house. He cautions that if he is not taken seriously now, he will be this way all the time. Sometimes it’s hard to realize how bad it is until images like this are shared.

Expect an increase in the case count of asthma, allergies, COPD and other diseases related to the lungs.

3. Firefighters douse smoking debris as smoke rises in the background

This picture is another shared on Twitter. It shows the seriousness of our changing climate. Firefighters are working hard to put out the fires.

The post in which this photo was shared says that the effects of a severely changeable climate are impacting the nation financially. With the costs of the damage, the repair of the damage and the work done, it is catastrophic for the economy. Beyond that, we are putting our first responders in danger by sending them into these dangerous situations.

All over the world, animals are dying due to climate change, such as in the photo here. In the Southern Ocean, penguins, seals, whales and many other wildlife are dying. Their homes are being destroyed due to rising water levels and rising water temperatures.

5. Firefighters are risking their lives

Every time a wildfire ignites in our country, firefighters risk their lives to save people, homes, businesses, animals, and our country. A shared Twitter user this picture and called those who say that climate change is a hoax. As this image shows, states like Colorado, Oregon and California place first responders in extreme danger.

Forest fires caused by climate change are displacing families. They are running out of a place to go and a home to not even try to repair. The fires are putting them out and leaving families devastated, as captured in this picture shared on Facebook.

7. Polar bears are losing their habitat

This picture was shared in a Facebook post and captures the dire effects of climate change. A photographer named Patty Waymire took this photo on Barter Island, Alaska. Instead of photographing polar bears in snow or ice, he was surprised to photograph them this way.

There was no snow in sight and little without ice in water. While the beach used to be covered in ice, it is now sandy and warm. If this continues, polar bears will have nowhere to live or forage for food.

As explained above, there is little or no ice left in the water in this part of Alaska. This picture (also from Patty Waymire) shows the truth that a polar bear tries to swim through it.

In the past, the Northwest Passage was filled with ice and cruise ships couldn’t make the trip. Now, with much of the ice melted, ships can pass through it. This is only possible due to climate change, but it is not beneficial for the environment.

It is clear when looking this picture that this part of the world already sees the impact. Now that ships are navigating these waters, wildlife will likely be further affected.

As water levels continue to rise, more and more land is lost. This is causing many houses to become uninhabitable and entire towns they have to move. In this facebook imageYou can see how serious it is, since the water is already very close to the houses.

11. Erosion is ruining the lake dunes

The Great Lakes around Michigan are experiencing massive erosion that is ruining the dunes. Since the climate is warmer, it is causing intense storms and waves that cause intense damage along the coast. It is ruining buildings, dunes, cliffs, and even the lake bed.

Lake bed damage occurs when massive waves hit the shoreline and dig in the lake bed. It’s causing the water to get deeper in those areas, allowing even bigger waves to wash ashore.

Is The image is another that reveals the damaging impact that climate change is having on the Great Lakes region. The house shown in the photo has since been demolished because there was no way to save the dunes or the house.

As you can see in this image, much of the terrain between the house and the lake is gone. The house was left without protection and it became necessary to dismantle it. As erosion continues, it is difficult to predict how far back the coast will be in the future.

We found this image on Facebook. It shows the Pedersen Glacier in Alaska. A photographer captured the top image 100 years before the bottom photo.

The difference between these two images will surely convince you of the severity of a changing climate. Where there once was water, ice and glaciers, now there is an empty field full of grass.

Cities are flooding to the point where they are impossible to navigate. If the climate continues to change, this flood will only get worse.

This scene shows Venice, Italy. There, the floods are ruining homes, businesses and people’s livelihoods. Also, think of all historic buildings and artifacts which are destroyed in the process.

With climate change that has already occurred, coral reefs are rapidly disappearing, as these photos show. This is tragic because coral reefs are the habitat of almost 25% of marine animals. Without habitat, there is no way of knowing what will happen to these species.

The photographers took these photos only six years apart. Lake Aculeo, located in Chile, dried up completely due to rising global temperatures and lack of rainfall. What was once a 20 foot lake It has become a giant crater, instead.

17. Beautiful bodies of water are disappearing

As shown before, lakes are drying up due to climate change, but this picture shows that other bodies of water are also drying up. This photo shows the Theewaterskloof Dam in South Africa, which has also completely dried up.

The Grinnell Glacier is located in Glacier National Park in Montana. What was once a giant glacier now looks more like a lake with ice. While the park is still beautiful, the effects of a changing climate have taken their toll.

Located on the Zambezi River in southern Africa, Victoria Falls are home to many plants and animals. It was once a waterfall that flowed a lot, but it has dried up so much that it is now a small stream. This is sad not only for the beauty aspect, but for all the species that call it home.

Lake Oroville in California normally requires a bridge to cross. Sometimes, however, it becomes so dry that it has no water.

Then, just as quickly, it will fill so much that it will overflow and the houses will have to be evacuated. This shows the drastic weather patterns that are developing due to climate change.

Many people still deny that climate change is happening. These images prove it. They demonstrate the seriousness of the problem and enlighten us on what could happen in the future.

While a lot of damage has already been done, it is not too late to improve the future. With lifestyle changes and awareness of the dangers, decline can be stopped.

Pat Flynn on Why You Should (Re-)Consider Religion

The professor using compassion to detoxify the debate about trans rights