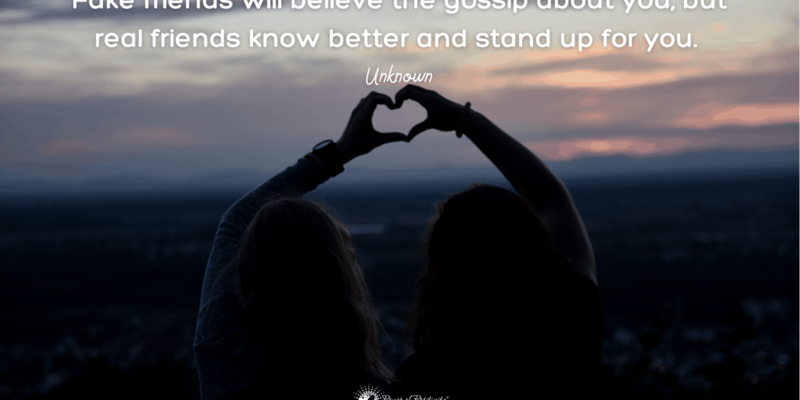 
Recognizing the fake people in your life may seem difficult, but these revealing quotes about fake people will help you. Unfortunately, there are fake people around you almost every day of your life. It is important to identify these people to take care of yourself and to know who to trust.

Many people will call themselves your friends, but some of them may be false. The quotes about fake people discussed below will make that clear for you, unfortunate as it is.

Fortunately, once you have learned how to identify fake people, your life will be easier. You will know who to keep an eye on and you will be able to weed out the fake people.

1. “Everyone is not your friend. Just because they hang out with you and laugh with you doesn’t mean you’re your friends. People pretend well. At the end of the day, real situations expose fake people, so pay attention. “- Unknown

When things are not going well, pay attention to who is still around. You will notice that some of the people who pretend to be your friends are not there when you need them. These are the fake people in your life.

2. “False people hate honesty. It is the lies that make them feel good about themselves and their lives. So, share your true feelings about your actions and watch them fade away. “- Unknown

As this quote explains, fake people don’t like honesty, and they lie often. Their lies make them feel better and they don’t like people criticizing them.

3. “A lot of people want to ride with you in the limo, but what you want is someone to take the bus with you when the limo breaks down.” – Oprah Winfrey

Everyone will pretend to be your friends when things are going well and when you have something to offer. However, once that goes away, and you need some support, the fake ones won’t be there anymore. Be on the lookout for those who are there when you are in trouble and pay attention to those who are not.

Don’t consider anyone your friend unless they’ve tried it, as Rowe explains. As many of these fake person quotes explain, you will have a lot of people around when you can offer something.

Just tell friends who are there when you have nothing to offer and when you need them. Those are the ones you can count on when listing your true friends, not the ones who don’t show up.

5. “Only the big-hearted can be true friends. The bad guys and the cowards can never know what true friendship means. “- Charles Kingsley

If you notice that someone in your circle tends to be mean to others, behaving like a coward, keep an eye on him. These types of people cannot be true friends and they tend to be fake. Don’t let your guard down and be careful about the information you share with them.

6. “Always be careful with your friend who loves your enemy; Either you trust that guy for your life or for your death! “- Ernest Agyemang Yeboah

Your true friends will not support your enemy and surely will not love them, like Yeboah He says. If you have a friend who adores your enemy, he is false even when he knows the situation.

They can take anything you tell them or anything you do and use it against you. Even if that wasn’t your intention to begin with, it will probably occur to your enemy.

7. “Fake friends will believe gossip about you, but real friends know better and defend you.” – Unknown

8. “I prefer to surround myself with people who reveal their imperfection, rather than people who fake their perfection.” – Charles Glassman

People who pretend to be perfect are fake, which is obvious since no one is perfect. They are not showing their true character, but rather they are covering things to represent perfection. Those who own their flaws and don’t pretend they don’t exist are the real people in your life.

9. “A true friend cares about what happens in your life. A fake friend will make your problems seem bigger. Be a true friend. “- Unknown

When you tell a friend about something that is happening in your life, they won’t downplay it. On the other hand, fake people will not only downplay you, but make it seem like your problems are worse. They won’t let you vent or trust them without making the conversation about themselves.

10. “False friendship, like ivy, decays and ruins the walls it embraces; but true friendship gives new life and animation to the object it holds. – Richard Burton

Fake friends will try to take you down, no matter how they have to. If you feel like someone in your life is not building you up or making you feel good, it is likely false. A true friend will support you, help you and make life positively exciting when you are with them.

When things are going well, many people will surround you. They’ll be there for excitement and fun, but they’ll disappear when you need them most. This is the best way to see how you will know the difference between fake people and real friends.

12. “I prefer to hang out with real people, and real people don’t have to brag.” – Charles Glassman

As Glassman He explains, the people who brag are not real. Real people don’t brag because they don’t feel the need to look good. So if you spend time with people who brag, keep in mind that they may not always be truthful.

In a time of need, your true friends will go out of their way to come help. On the other hand, fake people will give you an excuse as to why they can’t help. You can always recognize the fake people in your life when you need someone to help you.

14. “A true friend never gets in your way unless you are falling.” – Arnold H. Glasow

When you are progressing in life, friends will not stand in your way. They will help you, support you, and encourage you to always do better. A fake personOn the other hand, it will try to prevent you from doing positive things.

A fake person can do this by literally interfering with what you are working on. Or they can do this by encouraging him to give up or do something different instead. Be careful around these types of people because they will always make it seem like they have your best interest in mind.

15. “Fake people are only nice when it suits them, or they usually have a hidden agenda. Genuinely nice people go out of their way to help others and have honest hearts. Stick with the ones who never let you down and keep their promises. You can’t fake that. “- Unknown

When fake people want something, they will behave in a way that is likely to get them what they want. They usually always have a selfish reason for being nice. Also, they usually never help others unless it benefits them too.

Fake people They are everywhere, and many of them will try to disguise themselves as your friend. However, with the wisdom found in these quotes about fake people, they will be revealed.

Keep these quotes in mind when evaluating the people in your life. Remember to watch out for those who are fake or tend to have some of the qualities mentioned in these fake person quotes.