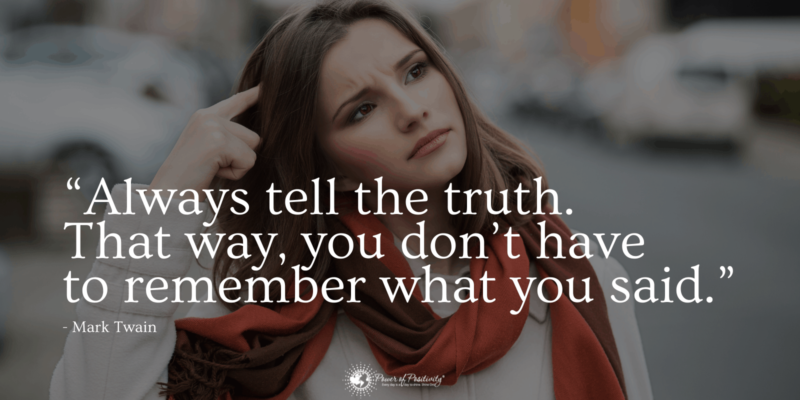 The truth is not always easy to tell, but telling the truth is essential, even when it is difficult. People tend to think that lying or hiding the truth is easier, but that is not entirely true. Many times, sticking to a lie is more difficult than it would have been to tell the truth.

Even knowing that the truth important, it is still tempting to take the easy route and lie a bit. Rising above that temptation shows your inner courage and strength while showing that you are an honest person. Also, if you don’t lie, you don’t have to try to remember what you said later.

When you think telling a lie is the easiest route, change your mind. Telling lies traps you in a confusing mess with no possible solution. However, telling the truth will allow you to find an answer that improves the situation in one way or another.

Twenty quotes about telling the truth, even when it’s hard

1. “Stop holding your truth; tell your truth. Be yourself. It’s the healthiest way to be. “- Tiffany Haddish

If you are hiding the truth because you are afraid to speak up, stop speaking. Be true to yourself and say what you have in mind.

Tell people the truth even when they don’t want to hear it. Telling the truth is the healthiest way to live, as Haddish Explain.

2. “The truth is always found in simplicity, and not in the multiplicity and confusion of things.” – Isaac Newton

Telling the truth allows you to simplify things. Lies only complicate situations and cause confusion, which doesn’t help anyone involved. Be honest and you won’t have to worry about the bigger issues that come with lying.

3. “Telling the truth is a beautiful act, even if the truth itself is ugly.” – Glen Duncan

No matter what the truth is, telling it is more beautiful than lying. When the truth is out, you can find solutions and make decisions based on the facts. Doing this is beneficial for you and the listener, even if it is difficult at first.

4. “You can hate me. You can go out there and say what you want about me, but you will love me later because I told you the truth. “- Mary J. Blige

When you’re telling the truth, the other person may dislike you for a while. Things could get even more complicated, which is one of the reasons telling the truth is difficult. However, later on, that person will thank you for being honest.

When you lie, you drag things out, get caught up in more lies, and continually disrespect the other person. If they find out that you have been lying, they will be even angrier than if they had heard it from you.

5. “Whoever is careless with the truth in small matters cannot be trusted with important matters.” – Albert Einstein

If you are caught in a lie, it will discredit you for a long time. The person you lied to will not believe you about the important things if you lie about something. Therefore, avoid this situation by always being honest, even when it is difficult.

6. “Never be afraid to speak up for honesty, truth, and compassion against injustice, lies, and greed. If people all over the world did this, it would change the earth. “- William Faulkner

While telling the truth is sometimes difficult, it is better than the alternative option. Don’t be afraid to speak up and express your honest opinion. What Faulkner He explains, if everyone were honest, the world would be a much better place.

7. “The truth only means something when it is difficult to admit.” – Nicholas Sparks

If the truth were easy to tell, everyone would. The harder it is to say it out loud, the more meaningful it is.

Remember this quote the next time you need to speak up and tell the truth. It will remind you that it is only difficult because it means so much.

8. “The great enemy of the truth many times is not the lie, deliberate, invented and dishonest, but the myth, persistent, persuasive and unrealistic.” – John F. Kennedy

While deliberate dishonesty is bad enough, it is not the worst part of telling a lie. Creating a false narrative in someone’s mind and giving them empty promises and hope is even worse.

The next time you consider lying to someone, remember what it will do to them. No matter who it is, the other person deserves to know the truth, no matter how difficult it may be.

9. “The truth is not always beautiful, nor the beautiful words the truth.” – Lao Tse

Saying what someone wants to hear may sound beautiful, but the words are not the truth. Likewise, the truth may not always be beautiful, but at least it is honest. Choose honesty and integrity about speaking beautiful but dishonest words.

The truth and doing the right thing should always have a precedent for telling a lie or hiding from the truth. Honesty shows courage and integrity, so make sure you are on the right track.

11. “Once you eliminate the impossible, what remains, however improbable, must be the truth.” – Arthur Conan Doyle

You can’t build anything based on lies, so if you are working towards something good, make sure there is honesty along the way. Overcoming obstacles and overcoming setbacks will only get you so far if the truth is not there in the end. Tell the truth up front and you can trust that you are building on a solid foundation.

12. “For every good reason there is to lie, there is a better reason, to tell the truth.” – Bo Bennett

You may try to justify telling a lie or hide the truth, and you may come up with a few good reasons. If you are looking for a justification, think about the benefits of honesty. Thinking this way can help you recognize the benefits of telling the truth, even when it is tempting to lie.

13. “There is nothing as strong or sure in an emergency of life as the simple truth.” – Charles Dickens

When the going gets tough, the truth can offer strength and security. Knowing fully what is happening can bring peace in a way that correlates with progress. When the truth is hidden, there will always be a sense of worry and weakness in the relationship.

14. “Honest communication is based on truth and integrity and mutual respect.” – Benjamin E. Mays

Without truth and integrity, there can be honest communication. Also, dishonesty is a sign of disrespect for the other person. You don’t want to be treated that way, so offer the same consideration.

Instead of lowering yourself to this level, choose honesty. If you are honest from the beginning, the rest will be easier.

15. “Always tell the truth. That way, you don’t have to remember what you said. “- Mark Twain

When you tell lies, it’s easy to forget what you said. Also, sometimes you have to build on those lies or tell new lies to cover up the truth. The whole process is complicated and confusing, so it is best avoided.

However, when you are telling the truth, you don’t have to worry about forgetting what you said. Since you were honest, you can recall the event by heart and avoid being caught in a lie. Telling the truth saves you stress and also simplifies your communication.

Final Thoughts on Quotes About Telling the Truth, Even When It’s Hard

Telling the truth is not always easy, but it is better than the alternative. By being honest up front, you can find a realistic solution that works and is not based on lies. Plus, there are always more reasons to be honest, anyway, so it really works the best that way.

Note that you will also not have a confusing mess of lies to remember and go straight. When you tell the truth, you only have one story to follow. Plus, you won’t have to create any more stories based on the things you made up.

If you choose to tell the truth, everything will turn out as it was supposed to. It can be hard to say words that you know the other person doesn’t want to hear, but it’s better than cheating on them. Remember these quotes about telling the truth the next time you find yourself in this situation.

COVID Cases, Deaths, and Hospitalizations Are Plummeting Toward Zero in Most of the US

Seniors Are Now Texting Grandchildren as a Way to Bond, After Learning the Skill in Lockdown: Survey