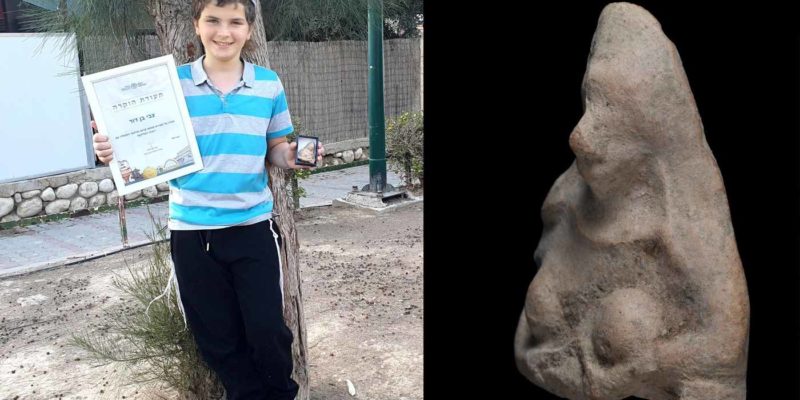 
That children love to collect stones is a fact. Finding an unusual stone is the dream of every beginning geologist. But finding an ancient relic? That is quite surprising.

Zvi Ben-David was on a family walk near Israel’s Besor River when something out of the ordinary caught his eye. When the 11-year-old broke the artifact, he probably had no idea that a Indiana Jones moment.

The small object he had unearthed was actually a 2,500-year-old fertility charm. “The statuette that Zvi discovered is so rare that there is only one example in the collection of National Treasures,” published the Israel Antiquities Authority (IAA) in its Facebook page.

PLUS: Ancient biblical scrolls and rare coins of ‘priceless value to mankind’ discovered in a desert cave

Considered an icon of good luck during the late First Temple period (the era between the time King Solomon’s Temple was built around 957 BC and destroyed around 587 BC), it was thought that such amulets brought prosperity and protection.

Although it is a small country in the area, Israel is home to 37 registered archaeological sites. Thanks to being the location of the Bronze Age settlement of Tel Gamma, as well as its mention in The Book of Samuel, Nahal Besor is steeped in both historical and biblical significance. For decades, archaeologists have constantly strived to uncover the region’s hidden secrets.

Ben-David’s mom, Miriam, is a professional tour guide. Immediately realizing the historical significance of the article, he alerted the IAA to his son’s discovery. The organization was delighted with the find and also with the search engine.

RELATED: When the 8-year-old ‘queen’ finds a genuine ancient sword in a lake, her fans band together to forge a replica of it

“The exemplary citizenship of young Zvi Ben-David will allow us to enhance our understanding of worship practices in biblical times and man’s inherent need for material human personifications,” the IAA stated on Facebook. “The entire Ben-David family deserves great recognition. You do not agree?

SHARE this lucky find from a story with friends …

Once I Took a Week Long Walk in the Sahara