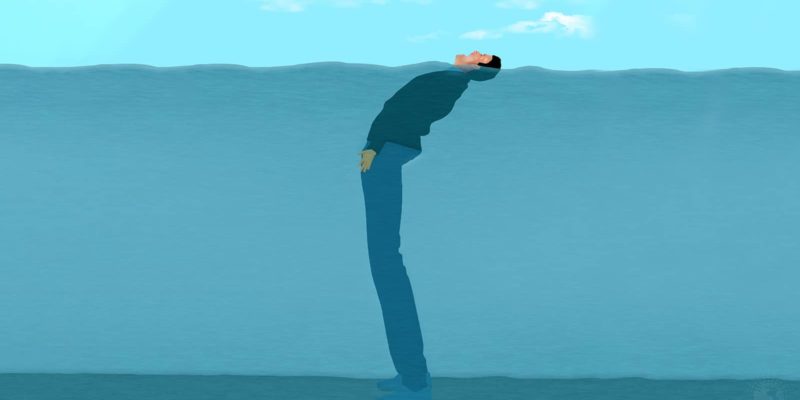 Suddenly the world around you looks different and it is almost as if you are looking through a snowball as your perception is distorted. Your head is spinning, your heart is racing, and your body begins to sweat like you’ve just run a marathon. The symptoms of a panic attack seem overwhelming.

But could it be something else?

For example, is your anxiety causing all this discomfort?

There are more than 2.7 million people in this country with panic disorder, according to Anxiety disorders statistics. Panic and anxiety are often confused because they are so similar. You may have panic attacks when everything seems to be going well, or you may have them during times of extreme stress.

Your body feels stress, and the fast-paced society in America does nothing to help ease this tension. Anxiety is a constant problem for many. It is a pain in the pit of the stomach that sometimes makes life unbearable.

Panic, on the other hand, is the feeling of impending death or total collapse, which occurs when your anxiety reaches an all-time high. While you may feel anxious, it still works, but the symptoms of a panic attack stop you in your tracks.

What’s so confusing about panic attack symptoms is that you don’t know if it’s anxiety or something that went wrong medically. How do you know the difference and when should you seek help?

Symptoms of a panic attack that you shouldn’t ignore

Even experts don’t know the difference between panic and heart problems until they run tests and a full evaluation. After you have coped with this disorder for some time, you will be able to recognize similar signs and symptoms. These are the most common symptoms of a panic attack that you should not ignore.

Chest pains are something that should not be taken lightly, no matter what the cause is. Panic can cause your muscles to constrict in this area and give you the feeling that you have a myocardial infarction. The key is to see if the pain is relieved or it comes and goes.

During a panic, the pain will last for the duration of the attack, but it should go away quickly. Additionally, panic is known to churn up stomach acids, which can also cause an uncomfortable feeling in the chest.

Not being able to catch your breath is a terrifying feeling, especially if it comes on suddenly. Many people hyperventilate during panic because the abundance of hormones in their body causes them discomfort. Remember the old bag breathing trick?

Many people breathe too fast when they panic, and it is often difficult to distinguish between shortness of breath and hyperventilation. Using the bag trick helps you return some of the oxygen you’ve lost to your body. You need to be careful because many people who suffer from heart attacks or other illnesses tend to hyperventilate.

Sweating is a way to cool the body and is expected when working hard or in extremely hot conditions. However, when the body is under intense fear, sweating can appear quickly, even when you are sitting watching television.

Dizziness is always alarming when you think the worst. While many things can make you dizzy, your anxiety will tell you which condition is of most concern, such as a heart attack, stroke, or cancer. Different people report feeling various things.

According to the National Institute of HealthMany vestibular disorders can cause vertigo or a feeling of imbalance due to a disturbance of the inner ear.

Feeling faint goes a step beyond dizziness. You may feel like you are falling and something is pushing you to the ground. Sadly, all this fear is probably on your mind.

Conditions like vasovagal syncope can cause this feeling, but people do not pass out from panic in most cases. According to Cedars-Sinai HospitalThose with syncope generally regain consciousness quickly. Some cases of panic are so severe that people pass out and family or friends call the team.

However, the most common way to differentiate between the two is that panic does not typically cause fainting, and syncope and other conditions will cause these terrifying experiences.

Heart palpitations feel like many things to different people. Some say they think their heart is racing, while others feel like it is skipping a beat or out of rhythm. It is important to note the frequencies of these occurrences and how long they last.

If you have continuous palpitations, getting emergency care is essential. Since panic is so difficult to differentiate from heart problems, it is always best to err on the side of caution. Stress can make your heart do fun things, but so can heart disease.

Also, conditions like atrial fibrillation can be a life threatening situation that needs to be addressed quickly. The Mayo Clinic states that this rapid and unstable heart rate can cause cardiac arrest or death if left untreated.

Have you ever seen a horror movie and seen an actor or actress so scared that they are shaking in fear? The same thing happens inside your body. When you have an intense fear of panic or anxiety, it can make your whole body shake.

The adrenaline and cortisol rush can make you feel all kinds of sensations. The good news is that these chills will go away quickly when your hormone levels return to normal. Chills can also be associated with illness, so you need to make sure it’s anxiety and not a stomach bug or flu.

Sometimes you can be so scared that you can’t move. The body may experience fight, flight, or freeze episodes that freeze it. When the symptoms of a panic attack become so severe that you are catatonic or feel trapped, then it is a sign that your condition may be transforming into a somatoform disorder.

However, people can experience hysterical blindness or paralysis due to extreme levels of anxiety. According to American Family Physician, conversion disorder is included in the somatoform category.

9. Fear of dying or losing control

Anxiety is often called the big suitor because it can make you think and feel things that aren’t real. A major problem people with panic disorder face is that they become affraid to die. Your body feels sensations that you do not understand and are abnormal, so your first thought is that you are going to lose control of your life.

Many people avoid going in public once they have panic attacks, which can morph into agoraphobia, a social anxiety disorder. Also, after having dealt with panic for so long, you can become numb. For example, you may have the feeling of impending death, but you shake it off due to panic.

However, something may be wrong with the body that makes you feel this way. Other problems, like brain cancer, can cause you to feel all kinds of sensations. So don’t be too quick to dismiss things just because they follow a typical pattern.

One of the worst symptoms of a panic attack that people experience is detachment. Do you feel detached from your body during periods of severe discomfort? This only occurs in those who have a serious anxiety problem and is a coping mechanism of the body.

You may feel that you are looking at yourself from the outside or that you have assumed an alter ego. According to the Quiet clinic, detachment can be mental, emotional, or physical in nature.

Final thoughts on recognizing the ten symptoms of a panic attack

When you look at the list of things that happen to you during panic, it’s really horrible to think that chemical imbalances and circumstances can do this to you. Since anxiety mimics so many other conditions, you can never be too sure.

While you don’t want to rush to the hospital every time you have Heart palpitations or chills, you need to know when to be evaluated. The symptoms of a panic attack are different for each person, and your panic can change over time.

His attacks may start as choking sensations with fear of impending death and his racing heart, but years later, they become more or less severe with different symptoms. Fortunately, there are many holistic methods to treat both panic and anxiety so that you can live a happy and carefree life.