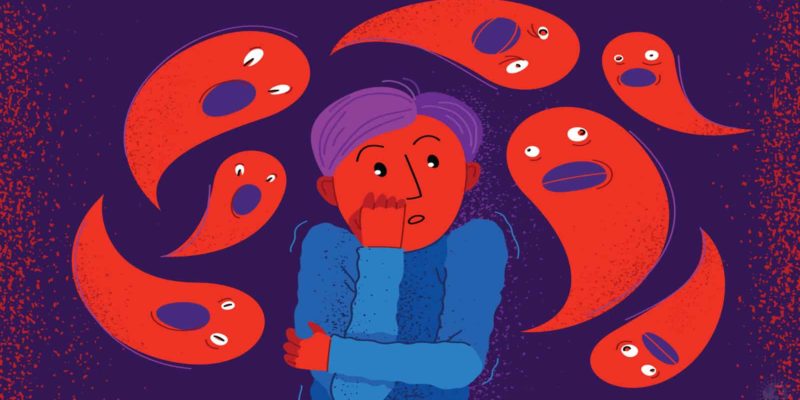 
If you know someone who you think might be paranoid, you may be curious about their behaviors. Here are 10 common behaviors of someone who is paranoid.

Paranoia, according to a recent study, Paranoia has two main characteristics:

Those who suffer from paranoia have the feeling of being watched or threatened by the people around them. Paranoia is common, although it varies in intensity and frequency in people. Everyone is a little paranoid from time to time, especially when you feel vulnerable. You can worry about things, even if you know they are not based on reality.

But clinical paranoia is different. It is associated with a mental health disorder that causes sufferers to live with constant anxiety and fear that people are trying to deceive, lie, or hurt them. It is a disabling disorder.

10 common behaviors that reveal someone is paranoid

There are some common symptoms of people suffering from paranoia. They can present a little differently depending on the person and the severity of their condition. These are the behaviors you may see in someone who you think might be paranoid. According to the National Institute of HealthHere are some of the main red flags.

Paranoid people have a hard time trusting people. They assume that people are going to hurt them. Because of this, they will limit your social contact with people. They begin to question the loyalty of their relatives, assuming they are trying to exploit or deceive them.

Similar to distrust, a paranoid person questions people’s motives, assuming they want to do harm. They look for hidden meanings in what people say or do. If someone looks at them, they are suddenly suspicious of the person’s intentions.

Feelings of betrayal are common in a person suffering from paranoia. They assume their the couple is unfaithful for them or their boss plans to fire them. It is difficult to convince them otherwise.

A person struggling with paranoia is constantly on the alert, watching and waiting for someone or something to hurt them. They feel persecuted by the government or their family. They cannot let their guard down and will not share personal information for fear of it being used against them.

Those who suffer from paranoia cannot forgive people. Instead, they will hold a grudge and seek revenge. They assume that the person who apologized was lying to them. In addition, they feel that they are never wrong about what they do or about their valuations of people.

Paranoid people, ready to defend themselves, become hostile if they think someone is criticizing them. They stay away from family members and, if they have a partner, they become jealous and critical of them.

7 – Suspicion of other reasons

They are very reserved and suspicious.. If a delivery man says hello, he will read something negative on it. Their fears fuel these suspicions and they are often caught up in conspiracy theories, which only heightens their suspicions.

8 – Worried about being cheated

Paranoid people worry that other people are trying to trick them. That is why it is so difficult to help them. They assume the wrong motives of those closest to them. This worry causes them stress, which can lead to deeper symptoms of paranoia.

Those who suffer from paranoia believe that they are always right. Anyone who disagrees with them is perceived as wanting to hurt them. They will retaliate and react in anger when someone tries to explain why they are wrong. Paranoid people become hostile and stubborn, refusing to cooperate at any level because cooperation would be admitting that they are wrong.

Constant fears, worries and mistrust in people make paranoid people nervous and unable to relax. They believe that the government or others are trying to catch them, so they must be vigilant. They can’t sleep, which can lead to worse symptoms of paranoia.

How are people diagnosed with paranoia?

If you or a loved one suffers from paranoia, seek the help of a doctor. The doctor will evaluate to make the proper diagnosis. Here are things you can expect your doctor to do to diagnose paranoia.

What causes a person to be paranoid?

Paranoia is caused by some breakdown in a person’s mental and emotional abilities, especially in their ability to reason and explain their emotions. Doctors are not sure of the root causes, but there are a few reasons why people can develop this condition.

How is paranoia treated?

There is no cure for paranoia, but some treatments can help a person suffering from paranoia live a happier and more productive life. Of course, treatment will depend on the severity of the condition and the individual’s response to treatment. Treatments for paranoia include the following:

For the person suffering from paranoia, there needs to be a trusting relationship between them and their therapists to reduce their fears and help them with their social skills. It can take years for a person with paranoia to progress and recover.

What if someone you know is paranoid?

If you suspect that someone you know or love has paranoia, you may not know how to help them. Here are some suggestions that can help you.

1 – Ask yourself if what they believe could be true.

Sometimes people are dismissed as paranoid, but there are legitimate reasons for their paranoia. Don’t assume they are wrong. Check it out first.

Even if you don’t understand your fears, try to understand the root of your anxiety. It might help you understand why they believe these things.

Express your desire to understand them. Listen to their concerns and fears with an open mind. Please give them the benefit of the doubt. They may be isolating themselves from so many people. You are his only open ear.

4 – Be careful not to dismiss your fears.

You may not agree with your fears of the government conspiracy, but don’t dismiss your fears. Their feelings are real to them, even if they are not based on reality.

Admit your feelings without agreeing or disagreeing with them. You can’t force their feelings to change. They will feel threatened by you and will walk away if you respond negatively.

How to get help for someone who is paranoid

You can’t make a person with paranoia get help if they don’t want it. Pushing them will only get them away from you, assuming you have bad motives. Assure them of your love and concern. Tell them that it is okay to seek help. Always respect their wishes, even if you are sure they need help.

What about an emergency?

Final thoughts on how to determine if someone is paranoid

People with paranoia find it difficult to cope with social situations such as work, family gatherings, or school. They can have mild to severe symptoms and show them, especially when they feel stressed. Hopefully these symptoms, the treatment, and the ways you can help them will guide you in helping your friend or loved one.

Why Do People Get Zits? Dermatologists Explain 4 Causes